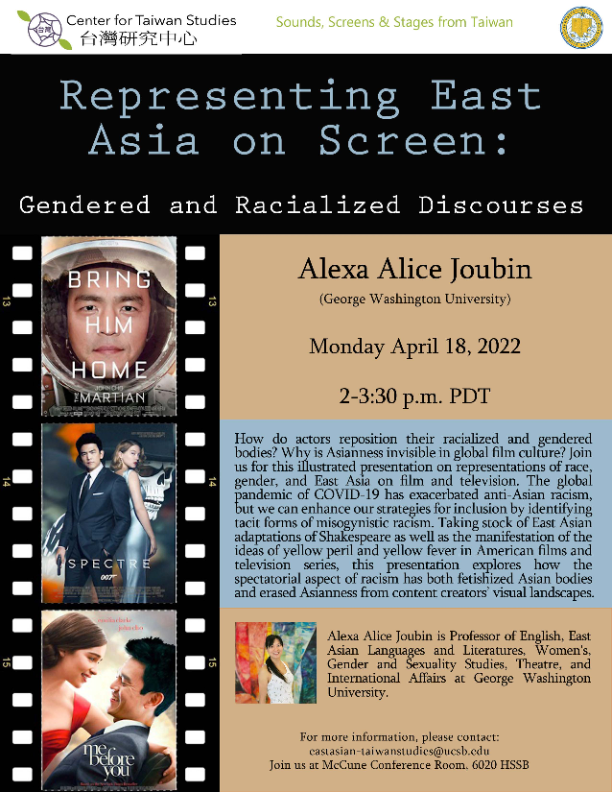 How do actors reposition their racialized and gendered bodies? Why is Asianness invisible in global film culture? Join us for this illustrated presentation on representations of race, gender, and East Asia on film and television.

The global pandemic of COVID-19 has exacerbated anti-Asian racism, but we can enhance our strategies for inclusion by identifying tacit forms of misogynistic racism. Taking stock of East Asian adaptations of Shakespeare as well as the manifestation of the ideas of yellow peril and yellow fever in American films and television series, this presentation explores how the spectatorial aspect of racism has both fetishized Asian bodies and erased Asianness from content creators’ visual landscapes.

Taking a tripartite approach to the question of self/representation, this talk explores:

(1) adaptations that offer a corrective to gender ideologies within Shakespeare, such as Muni Wei’s all-female As We Like It (Taiwan, 2021), Feng Xiaogang’s The Banquet (China, 2006), Abel Ferrara’s China Girl (USA, 1987), and Sherwood Hu’s Tibetan Prince of the Himalayas (2006); these films use the Western canon to de-colonize Western knowledge about Asia;

Professor Joubin’s research reveals deep connections among East Asian and Anglophone cinematic traditions and the new creativity the cultural exchange has made possible.

These case studies reveal that racialized thinking is institutionalized as gendered power relations in the cultural and political life, take the form of political marginalization of minority groups, and cause emotional distress and physical harm within and beyond the fictional universe.