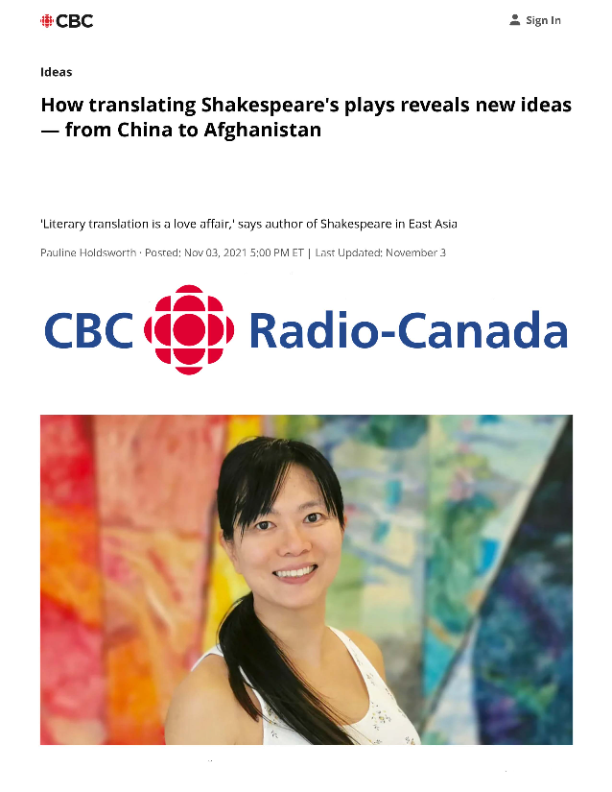 Literary translation is a love affair, says Alexa Alice Joubin, the author of Shakespeare in East Asia. A translator has to reach beyond the words to access the ideas and emotions contained in a text, and try to reconfigure them in a new language.

CBC Radio-Canada interviewed Alexa Alice Joubin in this episode. “Through a translation, we can learn a great deal about how others think about the same topics or stories, and we can find kindred spirits. We can actually also rediscover ourselves through translations,” said Joubin. In translation, Hamlet has the potential to become a more politically-charged play, she said. “In English language traditions, people tend to think it’s about procrastination.”

Joubin says translation offers a new way to think about Shakespeare — as well as about the world we live in. “The world is rich and beautiful. Very often people are more entrenched, maybe because of linguistic and cultural limitations. They simply stand at the same spot and look at the world,” she said. “[Then] they figure, maybe I can move an inch. What would it look like from this point of view?”

Guests in this episode:

Alexa Alice Joubin is professor of English, Theatre, International Affairs and East Asian Languages and Cultures at George Washington University. At MIT, she is co-founder and co-director of the open access Global Shakespeares digital performance archive, which includes Shakespeare performances in translation from around the world.

Alberto Manguel is an Argentine-Canadian translator and writer, and a former director of the National Library of Argentina. He now leads the Center for Research into the History of Reading in Lisbon.

Irena Makaryk is Distinguished Professor of English at the University of Ottawa. She studies how different cultures and periods reinterpret, revise, transform, and employ Shakespeare’s work, especially in times of political upheaval such as the Russian Revolution, World War Two and the war in Afghanistan.