Trans Studies and Why It Matters: A Conversation with Alexa Alice Joubin 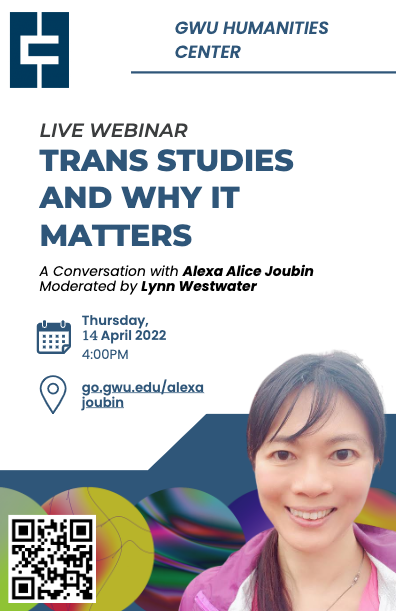 The event is organized by George Washington University Humanities Center and moderated by Lynn Westwater.

Excerpt from the conversation. This is not a full transcript but a highlight of the event. Please note the following content warning: gender-based violence and discrimination, film clips and verbal discussion of rape and misgendering acts.

To read a fuller transcript, visit this link on MIT.

Lynn Westwater: Gender has emerged as the latest wedge issue. Vladimir Putin used scaremongering about gender and sexual orientation to support his authoritarian agenda. In the midst of Russian invasion of Ukraine, Putin took time to complain about “cancel culture” in the West, claiming that Western elites had “canceled” J.K. Rowling because she “did not please fans of so-called gender freedoms.” Putin is referring to Rowling’s attacks of transgender rights. Why has gender become the latest battle ground for culture wars?

Alexa Alice Joubin: At first blush, it may seem odd that Putin should care about Rowling, the author of Harry Potter, when, in 2003, a group of Russian lawyers sued Warner Bros over similarities between Putin and the CGI character Dobby the elf.

Upon closer examination, Putin’s and Rowling’s obsession about gender purity is not odd at all. Right-wing politicians follow the same playbook. The pandemic of Covid-19 has fueled intersectional forms of hatred and fear that have coalesced around gender.

The presence of trans individuals creates a category crisis by challenging putative binary distinctiveness of gender. Further, it poses what is known in social identity theory as distinctiveness threat. When a group sees the boundaries defining their identity as indispensable, they feel threatened when these putatively definitional boundaries are blurred.

Gender identity is merely the latest scapegoat. There is a long history of associating trans bodies with illness, and inversion of trans individuals’ personal truths.